Indians in the Family

- Adoption and the Politics of Antebellum Expansion 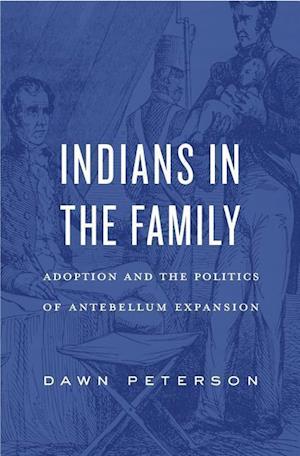 During his invasion of Creek Indian territory in 1813, future U.S. president Andrew Jackson discovered a Creek infant orphaned by his troops. Moved by an "unusual sympathy," Jackson sent the child to be adopted into his Tennessee plantation household. Through the stories of nearly a dozen white adopters, adopted Indian children, and their Native parents, Dawn Peterson opens a window onto the forgotten history of adoption in early nineteenth-century America. Indians in the Family shows the important role that adoption played in efforts to subdue Native peoples in the name of nation-building.As the United States aggressively expanded into Indian territories between 1790 and 1830, government officials stressed the importance of assimilating Native peoples into what they styled the United States' "national family." White households who adopted Indians--especially slaveholding Southern planters influenced by leaders such as Jackson--saw themselves as part of this expansionist project. They hoped to inculcate in their young charges U.S. attitudes toward private property, patriarchal family, and racial hierarchy.U.S. whites were not the only ones driving this process. Choctaw, Creek, and Chickasaw families sought to place their sons in white households, to be educated in the ways of U.S. governance and political economy. But there were unintended consequences for all concerned. As adults, these adopted Indians used their educations to thwart U.S. federal claims to their homelands, setting the stage for the political struggles that would culminate in the Indian Removal Act of 1830.

Forfattere
Bibliotekernes beskrivelse Through stories of a dozen white adopters, adopted Indian children, and their biological parents in early America, Dawn Peterson shows the role adoption and assimilation played in efforts to subdue Native peoples. As adults, adoptees used their education to thwart U.S. claims to their homelands, setting the stage for the Indian Removal Act of 1830.