In Community of Inquiry with Ann Margaret Sharp

indgår i serie Routledge International Studies in the Philosophy of Educati 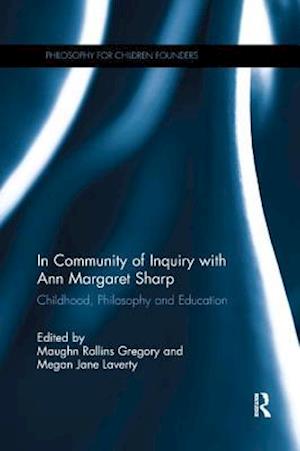 In close collaboration with the late Matthew Lipman, Ann Margaret Sharp pioneered the theory and practice of 'the community of philosophical inquiry' (CPI) as a way of practicing 'Philosophy for Children' and prepared thousands of philosophers and teachers throughout the world in this practice. In Community of Inquiry with Ann Margaret Sharp represents a long-awaited and much-needed anthology of Sharp's insightful and influential scholarship, bringing her enduring legacy to new generations of academics, postgraduate students and researchers in the fields of education, philosophy, philosophy of education, Philosophy for Children and philosophy of childhood. Sharp developed a unique perspective on the interdependence of education, philosophy, personhood and community that remains influential in many parts of the world. This perspective was shaped not only by Sharp's work in philosophy and education, but also by her avid studies in literature, feminism, aesthetic theory and ecumenical spirituality. Containing valuable contributions from senior figures in the fields in which Sharp produced her most focused scholarship, the chapters in this book present a critical overview of how Sharp's ideas relate to education, philosophy of education, and the Philosophy for Children movement as a whole. The historical and philosophical nature of this collection means that it will be a vital resource for philosophers and educators. It should also be of great interest to teacher educators and those involved in the study of pragmatism and feminism, as well as the history of education across the globe, particularly in the United States of America.