I Was Hitler's Pilot

- The Memoirs of Hans Baur 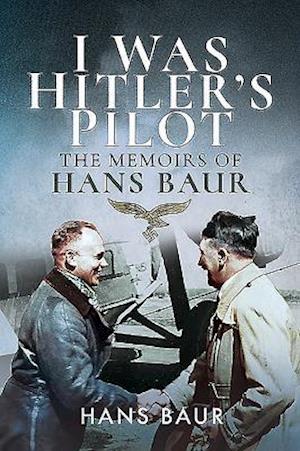 A decorated First World War pilot, Hans Baur was one of the leading commercial aviators of the 1920s before being before becoming Adolf Hitler's personal pilot, a role he first undertook during the election campaign in 1932\. Hitler, who loathed flying, felt safe with Baur and would allow no one else to pilot him. As a result, an intimate relationship developed between the two men and it is this which gives these memoirs a special significance. Hitler relaxed in Baur's company and talked freely of his plans and of his real opinions about his friends and allies.Baur was also present during some of the salient events in the history of the Third Reich; the R hm Putsch, the advent of Eva Braun, von Ribbentrop's journey to Moscow, and the attempt on Hitler's life in the B rgerbraukeller in Munich. When war came in 1939, it was Baur who flew Hitler from front to front.Baur remained in Hitler's service right up to the final days in the F hrerbunker. In a powerful account of Hitler's last hours, Baur describes his final discussions with the F hrer before his suicide; and his last meeting with Magda Goebbels in the tortuous moments before she helped kill her six children.Throughout it all, Baur's loyalty to the F hrer never wavered. His memoirs capture these events, and many others, in all their fascinating and disturbing detail.

Forfattere
Bibliotekernes beskrivelse Compelling personal account by Hitler's personal pilot and confidante. Written by one of few members of the inner circle to survive the final days in the F hrerbunker in Berlin. Central mono plate section