How a Schoolmaster Became a Catholic 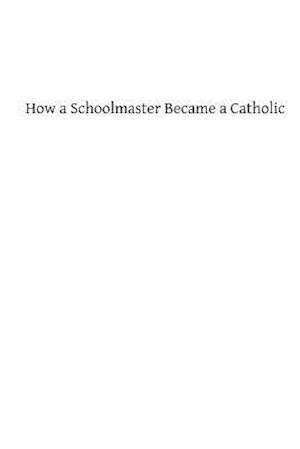 Mr. Taylor begins by stating that when a person becomes a Catholic, he is considered a lunatic. And this is indeed what the world thinks. Catholicism demands much from Catholics. So why would anyone want to become a Catholic? Taylor proceeds to go into great detail as to his prejudices against the Church and serious in depth study into the whole matter, which led to his conversion. "The greatest objection against the Catholic Church, that I had always harbored, was, that she has ever been an unrelenting persecutor of all who have differed from her in faith. I had been taught to believe, that her horrid butcheries have stained with blood the pages, of history; and that, had she the power to-day, she would not allow a Protestant to live. The persecution of heretics is with her a sacred work: their extermination, by brute force, is her great aim and object. This is no exaggeration: it is distinctly affirmed by many prominent Protestants." He then considers the matter fully. While considering persecution he says: "While investigating sections of history, for the purpose of learning something about persecution, I came across several scraps that have a bearing On another charge often leveled against the Church; namely, that it has always been her steady care and sensible interest to check every aspiration of her people towards intellectual culture." He then notes: "Few institutions connected with the Church have been more falsely described or foully defamed than the monastic orders. Since the time of Henry VIII."