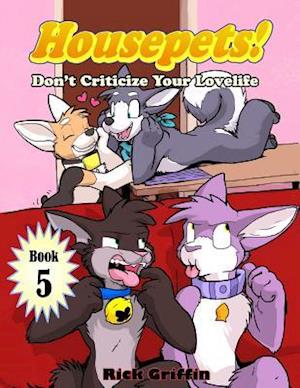 Housepets is (are?) back in a whole new collection, bringing together the fifth year of the award-winning webcomic series You'll laugh, you'll cry, you'll . . . well I don't want to be presumptuous. Most likely you will feel emotions of some kind, unless perhaps you are a psychopath. Are you a psychopath?"I am not a psychopath." --Tiger Arbelt"He's kind of a psychopath." --Marvin Arbelt"Literally everybody is crazy except for me." --Zach Arbelt"I don't like this author's fixation on psychopathy. Some of us ain't bad people I mean, I soitainly am, but that don't mean I appreciate being stereotyped." --Yeltsin"No comment. No, that doesn't mean you can print 'no comment' as a joke, either. It's stupid and played out." --Rock Milton"This book is a real steal." --"Four Finger Discount" Jack the Wolf