Homicide in the Attic Orators 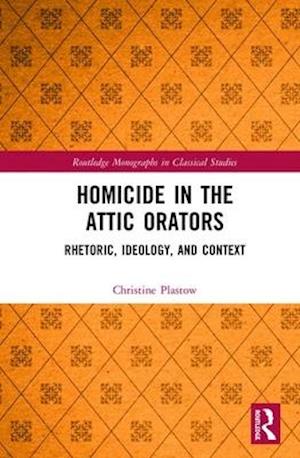 This study identifies specific features in the legal procedure and social perception of homicide in Athens in the time of the orators and examines how these features affected and were represented and utilised in forensic rhetoric.The socially transgressive nature of the crime in Athens resulted in homicide receiving a distinctive treatment in Athenian law, where it was 'set apart' from other crimes in a number of ways, including the courts in which it was tried, the procedures involved, and the fact that uniquely these laws were attributed to Drakon as mytho-historical lawgiver. Plastow explores how four distinctive features of homicide procedure and law at Athens played out in rhetoric: ideology, pollution, relevance, and the connected issues of motive and intent. Through exploration of these rhetorical themes, the volume also provides insight into the popular perceptions of homicide amongst the Athenians, since the orators' speeches make extensive use of persuasive techniques that tap into the deeply held beliefs and ideologies of the jury members. A secondary aim is to explore the effects of the physical context of delivery on the rhetoric of homicide: the courtroom spaces themselves, whether homicide courts or popular courts, with the variable ideologies that their locations and physical attributes provoked, as well as the aspects of ritual that would have been performed physically during a homicide trial.Homicide in the Attic Orators offers insight into this complex subject, and is of interest to anyone with an interest in Athenian law, rhetoric, and society.