- (HOW to Solve our Local and Global Problems in the Most Rational Manner Possible!) 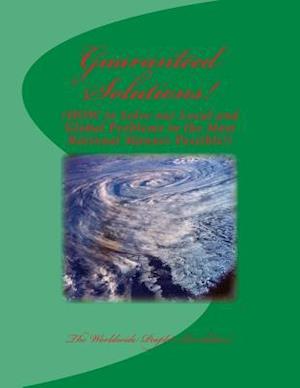 Most People in this World of Wonders would not even Pretend to have a Guaranteed Solution for any Problem, let alone for ALL of them And when we say "ALL," we Mean just Exactly that: beCause this Inspired Book contains "God's Solutions," which are Guaranteed to Work Well for most People in the World; but, not for ALL People: beCause some of them are CRAZY And there is not much that anyone can Do for Crazy People, even if they Reside in "The BIG White OUTHOUSE on the Not-so-Biblical Capitol DUNGHILL," which has those 2 very Stinking Holes for the Dimwitcrats and Reprobates to Squat on, which Stinks to the Highest Heaven with Ancient Elephant Droppings and Fresh Political Donkey Dung, you might say: beCause it is all ROTTING with Countless Bacterias, Germs and Worms. Yes, some of those Political Issues have been Mixed Up and Blended with Countless Lies a thousand Times, and they still STINK, in spite of being Sweetened with Imitation Honey, and Washed with Recycled Sewage Water, as Huck Finn might say to Nigger Jim in "The Adventures of Aunt Polly and the Widow Douglas," as Mark Twain might say to Judge Thatcher in the Low Court of Supreme Injustices. Nevertheless, Amazon.com Offers a ONE-MILLION-DOLLAR REWARD to anyone who can Prove our Selected King's Guaranteed Solutions to be Unworkable, or even Unreasonable with a Capital U, seeing that we have never Discovered any Better Solutions for our Massive Problems, Worldwide For Example, how many Taxes would there be, if everyone in the World should Learn, Believe, Love, and OBEY "The New MAGNIFIED Version of the 20 Commandments," which you can Discover in another Inspired Book by our Selected King, called: "LIGHTNING STRIKES Versus Lightning Bugs " (HOW you can Become Moderately RICH, without Telling any Lies nor Selling any Trash ) By The Worldwide People's Revolution (R) Book 074. Answer: NONE However, that is not to say that everyone in the World is going to Learn, Believe, Love, nor OBEY all of those Commandments: beCause some People Suffer with Severe Chronic Constipation of their Minds, whereby they cannot even Understand WHY all such Important Words should be CAPITALIZED However, if they had the Love of the Great Creator God in their Hearts, it would be no Problem; but, they only Honor God with their Mouths, while their Hearts and Minds are FAR from him, which is Proven by their Evil Words and WICKED WORKS, which they Seek to Justify for the Sake of Ungodly Gain, whereby some of those Edomites have made themselves Excessively RICH, while Billions of Poor People go right on Suffering in their States of Extreme Poverty, which is Proof that Capitalism is not Working so Well for them as it is for those Edomites, who are often Referred to as the ONE Percent, while the others are Referred to as the 99%, who got Lost in the Darkness of Ignorance, who Failed to Study such Enlightening Books as "Guaranteed Solutions " (HOW to Solve our Local and Global Problems in the Most Rational Manner Possible ) By The Worldwide People's Revolution (R), Book 080, which may very well be their Last Book, unless there is some Demand for more of their Inspired Words of Provable Truths: beCause their Selected King is getting Old and Tired of Fighting against the Devil and his Legions of Demon-possessed Possession Worshipers, who seek to Justify those Stinking Noisy Polluting and DANGEROUS ABOMINATIONS, which could be Accountable for the Destruction of our Beautiful World as we know it, whereby Climate Changes could Result with the Poles Shifting with a Capital P and S, whereby New York City could end up in the Bottom of the Atlantic Ocean Yes, that might get their Attention, if they Survived it; but, this Inspired Book Reveals HOW to Prevent all such Disasters, while making it a very Good World for everyone to Live in. Guaranteed.