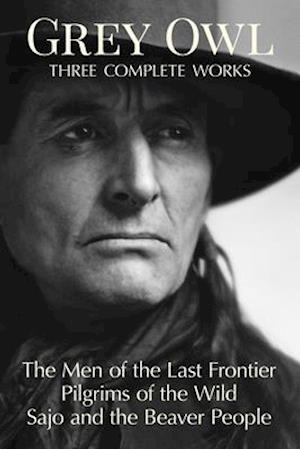 The three most famous and influential works from the controversial legend and early conservationist. Grey Owl was born Archibald Stansfeld Belaney, the son of an aristocrat in Hastings, Sussex, in 1888. Raised by his two aunts, he led a lonely childhood in England until 1906, when, at the tender age of seventeen, he emigrated to North America to live among the Native people. He returned to England a few years later to serve in the First World War, was wounded, and returned to live with the Ojibway in northern Canada. In mid-life Archibald Belaney adopted the Ojibway name Wa-sha-quonasin, or Grey Owl. He married three times and fathered three children. He also lived for many years with an Ojibway woman named Anahareo, and moved to northern Quebec, where he began his writing career in earnest. All of Grey Owl's stories are based on true-life experiences. As a canoeman, packer guide, fur trapper, naturalist and storyteller, Grey Owl's nature writings have delighted readers worldwide since they first began to appear in 1929, the same year that Grey Owl began to lecture as a conservationist. During the course of his career as a writer, Grey Owl's deep love and respect for nature came through in his body of work. Through his true tales of life lived in the wilderness, he helped to promote conservation awareness. Grey Owl contains three of his best-loved works: The Men of the Last Frontier was Grey Owl's first book, published in 1931. In this collection of stories, Grey Owl, one of the early voices to sound an alarm for increased conservation, tells about his life on the trail, his indigenous friends and their animal companions; Pilgrims of the Wild was published in 1934. Primarily an animal story, it also tells of Grey Owl and Anahareo's struggle to emerge from the chaos that followed the failure of the fur trade and the breakdown of the old proprietary system of hunting grounds. This is a humble and moving collection that paints a beautiful picture of a quickly changing land; Sajo and the Beaver People was published in 1935. The "beaverpeople" are two beaver kittens rescued and adopted by an indigenous hunter. The kittens soon become the beloved pets of the entire village. Their adventures and eventual reunion with their parents make this one of the most touching and irresistible stories in Grey Owl's body of work. The man that was Grey Owl will be fondly remembered as both a mystery and a legend. His love of nature and the wilderness, and his stories of life as a guide have become part of the canon of nature writing.

Forfattere
Bibliotekernes beskrivelse The three most famous and influential works from the controversial nature writer and legendary early conservationist, an Englishman who lived the life of a North American native. b&w photos