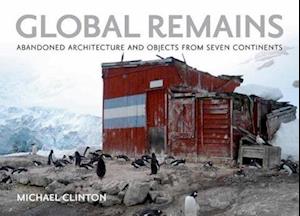 Photography by acclaimed photographer Michael Clinton.Global Remains is the third and final volume in his acclaimed Global series, featuring the design and architectural vestiges that make each of the countries he has visited distinct and memorable.In Global Remains, Michael Clinton offers a visionary collection of the different places around the world that have struck his perceptive eye: forgotten places and artefacts that range from homes, to churches, to planes, statues, temples, and farmhouses. Though abandoned, the objects and places retain grand vitality and rich character that have drawn Clinton to photograph these places. Photographs depict a multitude of beautiful forgotten places: a shipwreck immersed in sandy beaches; The Colosseum of Rome; ancient Buddha statues, or intriguing graffiti of Che Guevara. Clinton brings life back to these ruined churches, homes, streets, planes, and statues brilliantly with his lens. Michael Clinton's intense life-long desire to explore the world has led him to 120 countries and every continent on the globe with his camera in tow. His breathtaking photographs serve as a visual travel diary.Clinton's travels have brought him face-to-face with the most diverse peoples, spectacular cities, breathtaking landscapes, and exotic wildlife on the planet, allowing him to take spectacular photos of his experiences.