- A Brief But Affectionate History - Revised and Expanded Edition (Revised) 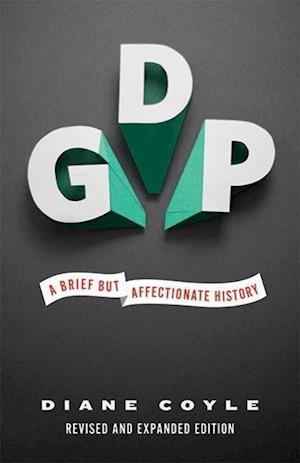 Why did the size of the U.S. economy increase by 3 percent on one day in mid-2013--or Ghana's balloon by 60 percent overnight in 2010? Why did the U.K. financial industry show its fastest expansion ever at the end of 2008--just as the world's financial system went into meltdown? And why was Greece's chief statistician charged with treason in 2013 for apparently doing nothing more than trying to accurately report the size of his country's economy? The answers to all these questions lie in the way we define and measure national economies around the world: Gross Domestic Product. This entertaining and informative book tells the story of GDP, making sense of a statistic that appears constantly in the news, business, and politics, and that seems to rule our lives--but that hardly anyone actually understands.

Diane Coyle traces the history of this artificial, abstract, complex, but exceedingly important statistic from its eighteenth- and nineteenth-century precursors through its invention in the 1940s and its postwar golden age, and then through the Great Crash up to today. The reader learns why this standard measure of the size of a country's economy was invented, how it has changed over the decades, and what its strengths and weaknesses are. The book explains why even small changes in GDP can decide elections, influence major political decisions, and determine whether countries can keep borrowing or be thrown into recession. The book ends by making the case that GDP was a good measure for the twentieth century but is increasingly inappropriate for a twenty-first-century economy driven by innovation, services, and intangible goods.

"Diane Coyle renders GDP accessible and introduces a much-needed historical perspective to the discourse of what we measure and why. A must-read for those interested in the far-reaching impact of GDP on the global economy, just as we seek ways to go beyond it."--Angel Gurria, secretary-general of the Organisation for Economic Co-operation and Development

"Countries are judged by their success in producing GDP. But what is it and where do those numbers reported on television come from? Diane Coyle makes GDP come to life--we see its strengths and its fallibilities, and we learn to understand and respect both."--Mervyn King, governor of the Bank of England, 2003-2013

"This is an engaging and witty but also profoundly important book. Diane Coyle clearly and elegantly explains the fundamental difficulties of GDP--and how this headline figure is liable to radical change by apparently simple changes in method. She also provides a nice treatment of alternative proposals such as happiness surveys."--Harold James, author of Making the European Monetary Union

"GDP: A Brief But Affectionate History is a fascinating 140-page book that I cannot recommend highly enough. This is simply the best book on GDP that I've ever seen."--John Mauldin

"Well written, interesting, and useful, this book will appeal to many readers. I learned a lot from it."--Robert Hahn, University of Oxford