From Docks and Sand 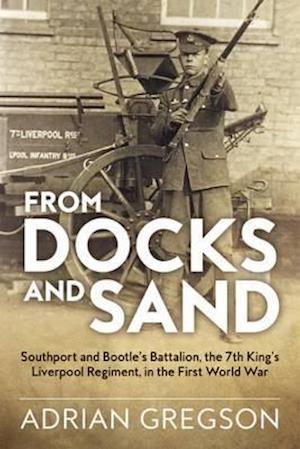 This book is a study of the importance and significance of community identity to a fighting unit in the First World War. In this case the unit in question is primarily 7th King's Regiment and more widely the 55th West Lancashire Division, 1914-18. The book is based upon the author's own PhD thesis "The 1/7th Battalion King's Liverpool Regiment and the Great War - the experience of a Territorial battalion and its Home Towns". It is an analysis of the relevance of the local communities to the battalion and its division and its combat effectiveness; the role played by the army in the local communities' involvement in the War; and the post-War ramifications of this relationship. In focusing on 1/7th Battalion Kings Liverpool Regiment, a Territorial battalion based in Bootle, Southport and the surrounding area of south west Lancashire, the thesis follows a typical Territorial unit and its home towns from recruitment and establishment to demobilisation and beyond. A wide range of primary sources have been examined including local newspapers, local Council records, official War Diaries of the various units, battle reports and private papers of several of the combatants in an extensive compilation of research. New perspectives are presented on several aspects of the First World War including the Lusitania riots; the battles of Festubert, 1915, and Givenchy, 1918; and the role of charities in post-War reconstruction work. It also raises general issues about the role of the Territorial Force and draws attention to several gaps in the social and military historiography of the War. The conclusion of the book is that local and community identity contributed significantly towards the 1/7th Kings' morale, organisation and hence battle effectiveness. This contribution initially stemmed from the local recruits themselves but was actively nurtured and encouraged by commanders at Battalion, Brigade and Divisional level throughout the War. It also establishes that by putting the local Battalion at the centre of its concerns, the rather disparate communities were able to organise, coalesce and maximise their War effort and support. Finally, it demonstrates in the post-War years, that, despite the fluctuations in this mutually important relationship, the local identification with the Battalion was maintained in memorialisation, remembrance and reconstruction.