- Essays in honour of P.G.M. Dickson 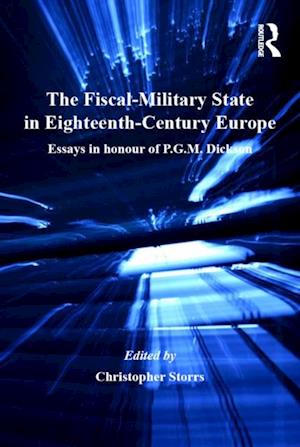 In recent decades, historians of early-modern Europe, and above all those who study the eighteenth century, have elaborated the concept of what has been called the 'fiscal-military state'. This is a state whose international effectiveness was founded upon the development of large armed forces, whose performance and supply necessitated both further administrative development and the provision of large sums, the raising of which involved unprecedented levels of taxation and borrowing by governments. The present collection of essays, by leading authorities in their individual fields, all of whom have published widely on their chosen topic, explores the subject of the fiscal-military state by focusing on its leading exemplars in eighteenth-century Europe: Austria, Britain, France, Prussia and Russia. It also includes a chapter on the Savoyard state (the kingdom of Sardinia), a lesser power whose career illuminates by comparison developments elsewhere. In addition, and rather unusually, a further chapter considers the fiscal-military state in a broader, comparative international context, in the arena of international relations. Each chapter provides a summary of the state of knowledge regarding the fiscal-military state debate insofar as it relates to the state under consideration. As well as contributing to that debate, they take matters further by systematically analysing the sources of wealth and income, and the way these were tapped, and the broader impact that this attempt to extract resources had on society and the state, both in the short and longer term. The differing patterns, and the variety of models of fiscal-military state makes for ease of comparison across Europe, making the volume an invaluable resource to both students and researchers alike.