Field Guide to the Bats of the Amazon

- Adri¿¿pez-Baucells: Field Guide to the Bats of the Amazon 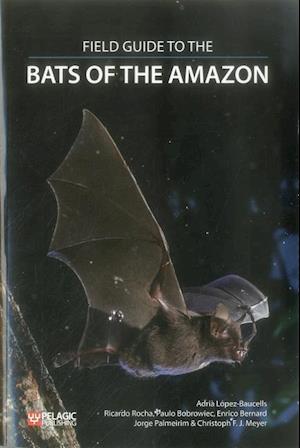 Do you think identifying bats in Europe or in North America is difficult? Well, try it in the Amazon. The planet's green lung is home to the most diverse bat communities on the planet with more than 160 species currently described. Local species richness often surpasses 100 and for many, their identification in the field is, to say the least, challenging. This task will now become easier with the publication of the Field Guide to the Bats of the Amazon: a landmark handbook aimed at facilitating species identification in the field.The book, written and designed by an international bat research team mainly based in the University of Lisbon in collaboration with the National Institute of Amazonian Research (INPA), is a guide for anyone conducting field work on bats in the Amazon or interested in bat biodiversity. It is largely based on previous published keys with modifications derived from both personal observations and years of field experience in the Brazilian Amazon at the Biological Dynamics of Forest Fragments Project (BDFFP), as well as a thorough revision of available bat keys and species descriptions.The field guide also features the first acoustic key for Amazonian bats, illustrated with the echolocation spectrogram of most species. This represents a major step towards alleviating the daunting task of identifying the numerous species of aerial insectivorous bats that occur in the Amazon based on their echolocation calls. It further constitutes an important tool to improving the knowledge and optimizing surveys of aerial insectivorous Neotropical bats, a group which remains largely understudied.The field guide provides an essential tool, not only for researchers, but also for bat conservationists, consultancies and anyone interested in Neotropical bats in general, and Amazonian bats in particular.

Forfattere
Bibliotekernes beskrivelse A species identification guide to the 160 species of bat described in the Amazon region, including a morphological identification key with stunning photographs and an acoustic key for Amazonian bats illustrated with the echolocation spectrogram of most species. 128 Illustrations, black and white; 558 Illustrations, color