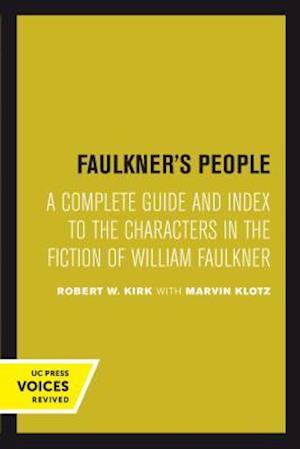 Faulkner's People is an essential reference for the student and general reader of Faulkner who seeks guidance in identifying and interrelating the more than 1,200 characters in Faulkner's novels, short stories, and sketches. The book will help even experienced readers make their way through the labyrinth of Faulkner's style and plots and distinguish the interconnections between all of Faulkner's writings. The guide is constructed as follows: The novels from Soldiers' Pay (1926) to The Reivers (1962) are listed by title in the order of their publication. Under each title, all of the named characters who appear or are mentioned in the work are listed alphabetically, together with the number of every page on which the character's name occurs. A concise account of the actions of each character is given, together with a description of that character's salient personality features. The name under which a character is listed in the guide is often supplied in brackets when a nickname, maiden name, or other variant is used in the sketches. Major characters in each novel are indicated by boldface type. Immediately following the section devoted to the novels appear the named characters in all of Faulkner's short stories and sketches, which are also treated in the order of their publication. Carryover characters who are handled inconsistently by Faulkner are marked with an asterisk and treated further by the authors in the appendix. The authors have also included genealogical charts of the Sartoris, Burden, and McCaslin-Beauchamp-Edmonds families, as well as a map of Yoknapatawpha County. Finally, an alphabetically arranged master index of characters lists every work in which their names occur. Specific bibliographical information concerning editions is given, together with other editions, American and British, with the same pagination. This title is part of UC Press's Voices Revived program, which commemorates University of California Press's mission to seek out and cultivate the brightest minds and give them voice, reach, and impact. Drawing on a backlist dating to 1893, Voices Revived makes high-quality, peer-reviewed scholarship accessible once again using print-on-demand technology. This title was originally published in 1963.