- Players Recall the Greatest Relief Pitcher Who Ever Lived 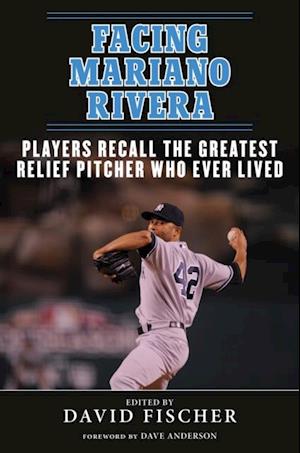 The all-time career leader in saves, with 652, Mariano Rivera is one of the greatest professional athletes in history. Since taking over the closers role for the New York Yankees in 1997, until his retirement in 2013, Rivera saved 30 or more games in every season but one. In addition, he has an astonishing MLB record 42 postseason saves, with 11 of them coming in the World Series. After 19 seasons in the Major Leagues, his preeminence among relief pitchers is assumed and his induction into Cooperstown assured.And he accomplished it all, mostly, with one devastating pitch: his signature cut fastball. As third baseman Corey Koskie put it: You knew what pitch [Riveras] going to throw, a cutter. . . . You start to swing at the pitch and the next thing you know, the ball explodes your bat. I tried multiple things hoping to figure out a way get the barrel [of the bat] on one of his pitches. . . . Nothing worked.Far from a conventional biography, Facing Mariano Rivera offers perspectives and testimonials from opponents and teammates alike, including Riveras minor-league roommate and the final batter he faced in the major leagues. Some opponents had uncommon success against The Sandman, and they share their secrets for hitting him. Most, however, echo the sentiments of five-time All-Star Mike Sweeney: When youre at Yankee Stadium and Mariano Rivera is coming in the game, it feels like a horror movie . . . when you hear the music and youre scared to death, because you know whats going to happen.Truly dominant pitchers come along only rarely. This book tells the reader what its like to battle one of the all-time best, in the words of the players who did just that. Skyhorse Publishing, as well as our Sports Publishing imprint, are proud to publish a broad range of books for readers interested in sportsbooks about baseball, pro football, college football, pro and college basketball, hockey, or soccer, we have a book about your sport or your team.Whether you are a New York Yankees fan or hail from Red Sox nation; whether you are a die-hard Green Bay Packers or Dallas Cowboys fan; whether you root for the Kentucky Wildcats, Louisville Cardinals, UCLA Bruins, or Kansas Jayhawks; whether you route for the Boston Bruins, Toronto Maple Leafs, Montreal Canadiens, or Los Angeles Kings; we have a book for you. While not every title we publish becomes a New York Times bestseller or a national bestseller, we are committed to publishing books on subjects that are sometimes overlooked by other publishers and to authors whose work might not otherwise find a home.