Ethnic Groups in the Republic of Turkey 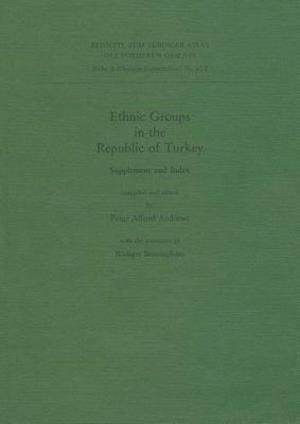 This volume represents a supplement to the first volume, which appeared in 1989, and provided the documentation on which TAVO maps A VIII 14 a-b (Republic of Turkey: Rural Ethnic Minorities) were based. The book remains the only comprehensive treatment of ethnic groups in Turkey yet attempted, and volume II brings it up to date.The new volume includes extensive documentation on areas for which material was not available in 1989, together with an index of villages, covering those referred to in both volumes, revised to include the administrative allocations in the latest census. The new material is concerned principally with Kurdish and Alevi villages in Central Anatolia, and differs from the lists in volume I in that it is provided mainly by the ethnic actors themselves, either in the form of regional surveys compiled privately by people from specific ethnic groups, or as lists culled from journals representing ethnic groups, in wich surveys began to appear only in the course of the last ten years. In addition there are new surveys compiled by specialist outsiders, such as one on the Laz, one on the Daghistanis and one on Arab settlements in Hatay. Further listings by villages and administrative districts provide additions to the lists in volume I, and where necessary, corrections. The numbering of surveys and lists is consistent with that in volume I. One additional ethnic group is considered, bringing the total described to 48.Volume II also contains a reappraisal of the present ethnic situation in Turkey, and an evaluation of current attitudes towards it, together with a postscript on the latest dramatic development in eastern Anatolia. Contributions on specific aspects of ethnicity in its latest manifestations are provided by R. Benninghaus on the Mhallami, L. Paul on the Zaza language and its ethnic implications, D. Shankland on an Alevi group in Central Anatolia and G. Wiessner on the Kurds.As before, it is hoped that the book will provide the basis for a wide variety of future work in which the identification of local cultures is important.