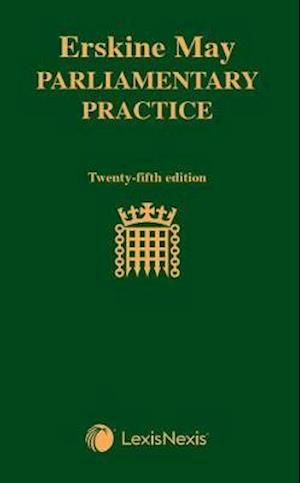 Erskine May is the eponymous guide to parliamentary practice and procedure, providing accurate and detailed information on the constituent parts of Parliament, its powers and jurisdictions, membership of either House, financial procedure and the process of debate.Alongside the incremental changes to and refinements of parliamentary practice which happen all the time, the 25th edition covers many significant developments since the last edition in 2011, including:* A new chapter on "English Votes for English Laws" introduced following the 2015 General Election, which details the varied and complex ways in which these engage with both primary and secondary legislation. * The process of implementing the outcome of the 2016 referendum on the UK's membership of the EU. An account is given of the procedures in both Houses for the scrutiny and approval of the transposition of EU law into UK law.* Further parliamentary consequences of the coalition government that took office in 2010, including the reforms introduced by the Wright Committee, the evolving impact of the introduction of the new category of "backbench business" and the election of Deputy Speakers in the House. * An e-petitions system overseen by a new Petitions Committee set up in 2015. * Changes to select committee working practices and powers under their new elected chairs.* A new financial timetable introduced in 2017 with the Chancellor's annual budget statement moving from Spring to Autumn, and a change to how Estimates Day debates are handled.* Important reforms to how the conduct of both MPs and members of the Lords is governed and how breaches of the respective codes are pursued. * Continuing arguments over the future of parliamentary privilege. Recent relevant court cases and developments within Parliament are assessed, including the 2013 Joint Committee on Parliamentary Privilege.