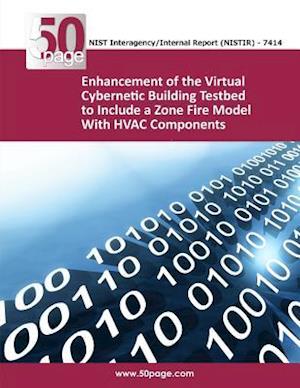 As part of a Cybernetic Building Systems project at the NIST Building and Fire Research Laboratory, a whole building emulator called the Virtual Cybernetic Building Testbed (VCBT) has been developed. The VCBT combines simulation tools with commercial building automation system products in order to emulate the characteristics of a commercial building and its various systems and controls. The VCBT simulates in real time the building envelope, weather, the heating ventilating and air-conditioning (HVAC) system, the heating/cooling plant, the fire detection system, and the security system. The simulation is linked through a data acquisition system to commercial products for HVAC control, fire detection, access control and lighting control in order to study their performance and interactions.This report describes a new simulation tool developed for the VCBT that combines a fire simulator called the Zone Fire Model with building shell and HVAC components derived from HVACSIM+. This new simulation tool is called the Zone Fire Model with HVAC components (ZFM-HVAC). Implementation of the ZFM-HVAC tool in the VCBT is described along with the results of emulation runs used to test its performance.