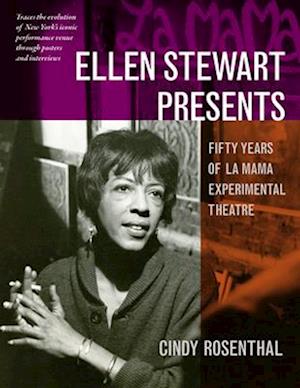 Ellen Stewart (1919-2011) was the single most important figure in the history of American avant-garde theater and performance art. Founder of La MaMa Experimental Theatre Club, Stewart was responsible for a staggering array of productions and for fostering the early work of directors, playwrights, actors, composers, and performance artists. Active until her death at age 91, Stewart also established a highly regarded workshop for directors and playwrights in Umbria, after receiving the prestigious MacArthur grant in 1985. Although she was a vital force in American theater for decades, Stewart resisted attempts to have the story of La MaMa written until five years before her death. Following Stewart's vision for this book, theater scholar Cindy Rosenthal relates the history of La MaMa through its performance posters, capturing the irreverence and the aesthetic of La MaMa over five decades. Richly illustrated, including posters and photographs of early productions and other rarely-seen photos, and featuring interviews with a wide range of now-famous La MaMa alums, Ellen Stewart Presents is a book for theater aficionados and anyone interested in the history of Off-Off-Broadway, the cultural history of New York City, or visual culture from the '60s to the present.