Doomed Before the Start 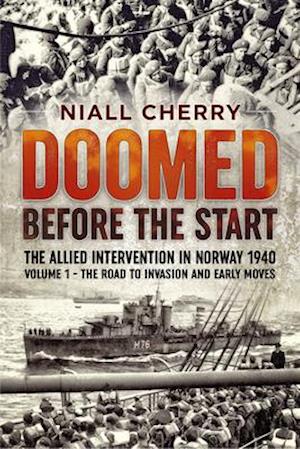 Books on the events of the early months of 1940 are dominated by the desperate fighting undertaken the British Expeditionary Force in Northern France and Belgium following the German invasion of May 10th and it is often overlooked that prior to this another British expeditionary force was involved in fierce fighting in Norway. Indeed, the invasion on April 9th saw the first use of airborne troops in the war and was also one of the very few amphibious operations undertaken by the Germans during the Second World War. It is hoped that Niall Cherry's new two-volume work covering the Allied intervention in Norway 1940 will fill this significant gap. The author provides a detailed account of the German invasion and the Allied reaction, including the land, sea and air battles. This includes such actions as the sinking of HMS Glowworm and HMS Glorious, the Gladiators on the frozen lakes and Maurice Force, the sacrifice of the Territorial Battalions at Tretten and the Independent Companies, to name but a few. Volume 1 focuses on the prelude to and early phases of the German invasion and Allied response. As in Niall's previous books, detailed research has been carried out using official reports, war diaries and veterans' accounts, supported by photographs and colour maps.