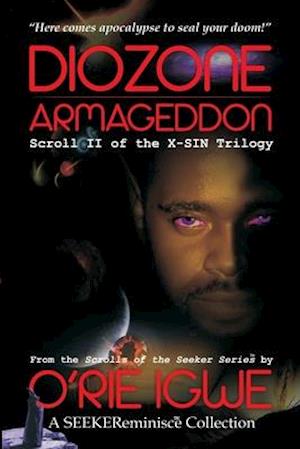 Armageddon is a sequel to The Melchizedeck in the X-SIN

and X-Sin battle the grotesquely monstrous trees of The

Dreaded Jungle of Twisted Trees, as they stumble through a secret portal to find themselves lost, somehow, somewhere on an unknown planet.

And as Chido (Tandia) goes looking for them, he gets

Castle, and dragged through a magical chimney, into a

hellish plane of Purgatory, to eventually behold the most

route to Diozone, leads her horrid army of Demonlings into an unforgettable war against the last line of Earth's cosmic defense. The battles are fierce, as they are unimaginably alien. What with the use of both physical and mindal energies unleashed by both adversaries in raging moods.

Would Dezzorqq and X-Sin survive their helpless, hopeless plight in the Lost Planet and find their way back to Earth; or would they become meals for the horrendous man-eating trees? Would Chido escape the heinous, hellish claws of the KnightMaya; or would he be crushed by the extra-awesome power of Shallan? Would Diozone escape

doomsday; or would it be wiped out of Cosmic Existence --

(Scroll II of the X-SIN Trilogy)