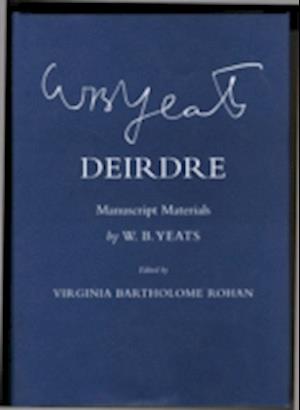 The ancient story of the ill-fated Deirdre and the Sons of Usnach has a special place in Irish literature-as a tale prefatory to The Tain-and a durable hold on the Irish imagination. Building on the many earlier literary retellings of the story, W. B. Yeats deliberately frames his 1906 play as an extension of the legend, writing a new death-tale for Deirdre that is also a personal statement about love, death, and the making of art.This edition of the manuscripts of Deirdre presents the transcription of work from three substantially different versions of the play through its first performance, together with post-performance revisions that throw light on what Yeats learned from producing the play on stage. Deirdre is an important transitional play in Yeats's career as a playwright. The manuscripts included here show him extending the limits of the conventionally staged play and initiating the development of some of the features of the dance plays (the use of chorus and song, the unity of metaphor, the compression of language).Most intriguing, however, is the view they offer of the play as it was first performed at the Abbey Theatre. The Cornell Yeats edition of Deirdre also features a series of sketches for staging the play, one of a very few pieces of evidence for Yeats's production plans for any of his early plays.

Forfattere
Bibliotekernes beskrivelse This edition of the manuscripts of "Deirdre" presents the transcription of work from three substantially different versions of the play through its first performance, together with post-performance revisions. 521 halftones