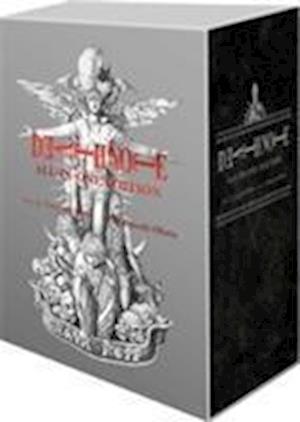 Forfatter
Forlagets beskrivelse All 12 volumes of Death Note in one monstrously large edition! This hefty omnibus combines all 2,400 pages of the megahit thriller into a single massive tome, presented in a beautiful silver slipcase. A perfect collectible conversation piece and a must-have for Death Note fans. Also contains an epilogue chapter never before seen in English! Light Yagami is an ace student with great prospects-and he's bored out of his mind. But all that changes when he finds the Death Note, a notebook dropped by a rogue Shinigami death god. Any human whose name is written in the notebook dies, and now Light has vowed to use the power of the Death Note to rid the world of evil. But when criminals begin dropping dead, the authorities send the legendary detective L to track down the killer. With L hot on his heels, will Light lose sight of his noble goal...or his life? All 12 volumes of Death Note in one massive book, also containing a chapter never published in English! * Netflix original Death Note movie released worldwide on August 25th, and was one of their most-watched titles over the launch weekend. * One of the most successful manga series of all time, Death Note volumes 1-12, Death Note: How to Read, omnibus Black Editions, Death Note Box Set, and two novels have sold a combined 1.8 million copies (US Bookscan 3/17); UK sales across all volumes stand at +723,000 copies, with UK Bookscan sales of +510,000 copies (08/17). * An incredible bargain at a fraction of the shelf space: less than half the price of all 12 individual volumes.
Bibliotekernes beskrivelse All 12 volumes of Death Note in one monstrously large edition!