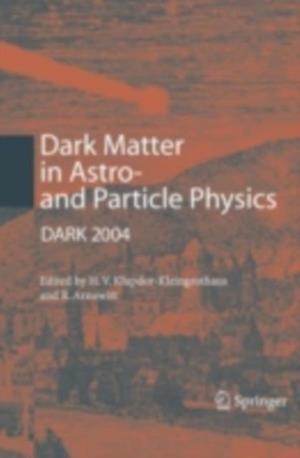 TheFifthHEIDELBERGInternationalConferenceonDarkMatterinAst- and Particle Physics, DARK 2004, took place at Texas A&M University, College Station Texas, USA, October 3-9, 2004. It was, after Cape Town 2002, the second conference of this series held outside Germany. The earlier meetings, starting in 1996, were held in Heidelberg. Dark Matter is still one of the most exciting and central ?elds of ast- physics, particle physics and cosmology. The conference covered, as usual for this series, a large range of topics, theoretical and experimental. Theoretical talks covered SUSY/SUGRA phenomenology, which provides at present a preferred theoretical framework for the existence of cold dark matter. Also included were other possible explanations of dark matter such as SUSY Q balls, exciting New Symmetries, etc. The most important experiments in the underground search for cold and hot dark matter were presented. Talks describing the current experimental dark matter bounds, what might be obtained in the near future, and the reach of future large (i.e. one ton) detectors were given. The potential of future colliders to correlate accelerator physics with dark matter searches was also outlined. Thus the reader will be able to see the present status and future prospects in the search for dark matter. The exciting astronomical evidence for dark matter and corresponding observations concerning the Milky Way's black hole, high-redshift clusters, wakes in dark matter halos were other important topics at the conference.