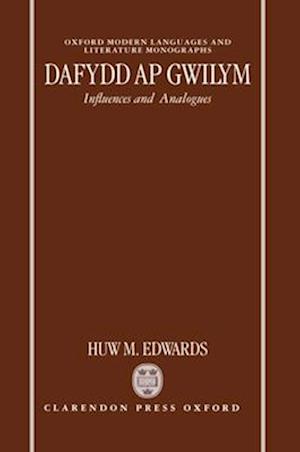 One of the great innovators of medieval literature, Dafydd ap Gwilym's poetic voice is as distinctive and resonant as those of his more celebrated contemporaries Chaucer and Boccaccio. This book - the first major study of the largely submerged popular verse tradition of medieval Wales and its likely enriching effect on the repertoire of the professional poets - examines Dafydd's use both of the native popular verse tradition and of the persuasive convention ofnorthern French verse to forge a new kind of poetry for a new age. Composing in the wake of the Edwardian conquest of Wales, Dafydd (fl. c. 1330-70) and a few kindred spirits sought to adapt and revitalize an already sophisticated bardic culture by expanding its subject matter to include a surprising variety of entertainment as well as formal praise. Huw M. Edwards sets out the first detailed comparison of Dafydd's verse with the highly influential poetry of northern France, in terms of themes, motifs and poetic genres since the publication of the authentic canon in 1952. The poet's bold and often playful handling of borrowed conventions will be of interest to all students of medieval poetry.

Forfattere
Bibliotekernes beskrivelse This major study of the popular verse tradition of medieval Wales examines Dafydd ap Gwilym's use both of the Welsh and northern French verse traditions in his successful bid to forge a new kind of poetry.