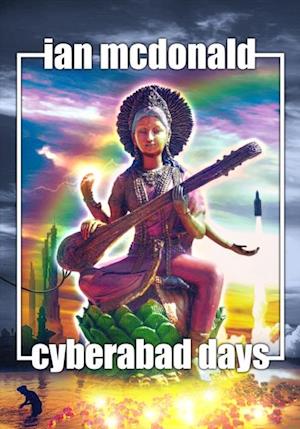 Cyberabad Days return to the India of 2047 as featured in Ian McDonald's acclaimed novel River of Gods. A new, muscular superpower of two billion people in an age of new nations, artificial intelligences, climate-change induced drought, water wars, strange new genders, genetically improved children that age at half the rate of baseline humanity, and a population where males outnumber females four to one.Cyberabad Days is a cycle of seven stories, three Hugo nominees and one Hugo winner among them, as well as an original thirty-one-thousand-word novella.Welcome back to the fierce, dazzling, thrilling world of River of Gods.Featuring:Sanjeev and Robotwallah (selected for both The Year's Best Science Fiction: Twenty-Fifth Annual Collection and Year's Best SF 13): A boy-soldier roboteer from the War of Separation learns that war may be hell, but peace is harder.Kyle meets the River: A young American in Varanasi learns the true meaning of 'nation building' in the early days of a new country.The Dust Assassin: In the time of water-wars, the daughter of a powerful water-raja learns that revenge revenge is a slow and subtle art.An Eligible Boy: Love and marriage is never easy when there four men for every women. But it should be easy with an Artificial Intelligence matchmaker. Shouldn't it?The Little Goddess (Hugo nominee for best novella of 2006): In Kathmandu, a child-goddess discovers what lies on the other side of godhood and what divinty really means.The Djinn's Wife (Hugo for best novelette and BSFA short-fiction winner of 2007): A minor Delhi celebrity falls in love with an artificial intelligence, but is it a marriage of heaven and hell? Vishnu at the Cat Circus: A genetically improved 'Brahmin'child finds himself left behind as he grows through the final generation of humanity.Praise for Cyberabad Days:'The sheer number of ideas and plotlines can sometimes make McDonald's novels seems dense, but the stories here are sharp, focused and witty.' -BBCFocus'McDonald's India engulfs you with an overwhelming, perfumed, stinky embrace. A hugely impressive collection. Seven nifty, witty stories.' -SFX'McDonald excels at conveying, in a gorgeous melange of sensory impressions, an India transformed by AIs, nanotech, robots and cybernetics: the subcontinent is chaotic and lurid, shot through with devotion to eternal Hindu gods and divided by internecine conflict. McDonald gives a refreshing take on the future from a non-western viewpoint.' -The Guardian