- Contribution to the History of Absolutism in Europe 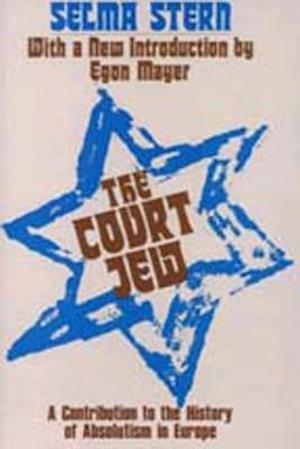 The period of court absolutism and early capitalism extended from the end of the Renaissance to the Enlightenment. A new world view was created, along with a new type of individual possessing new economic orientations to the marketplace and new social attitudes deriving from such concerns. The unified political and religious world of medieval Europe broke into parts: national differentiation and religious options abounded. The autonomy of the nation-state created a need for new attitudes toward religious minorities, even despised ones such as the Jews.The court Jew phenomenon, as Selma Stern details, was inextricably linked to these larger developments, including the emancipation of Jews as a whole. Dr. Stern's work is an effort to reconstruct this unusual group of Jews who became politically and economically influential and through that mechanism were able to enhance Jewish community life as a whole. In his very existence the court Jew necessarily enlarged, beyond its original meaning, the concept of free expression in European societies.As the dominating idea of defending one church and one emperor collapsed under the weight of the new European system of power balances, a new conception of the Jew developed, one of a transforming agent in economic and political positions. With trade no longer condemned as sinful, collecting interest for loans no longer prohibited, and the merchant no longe'r compared to a thief, the Jewish money changer and tradesman came to be viewed in a more favorable light. In this new environment, the claims of Christianity remained supreme, but the rights of religious minorities were considered.At the time of the book's initial appearance, the Saturday Review hailed it as a "picturesque work giving evidence of great writing talent." The reviewer went on to note that "Dr. Stern's work provided exhaustive historical background of European Jewry - from 1650 to 1750 - that period during which the modern European genius emerged." Dr. Stern's work relies heavily upon European archives up to 1938, when the advances of Nazism made further work impossible. As a result, what was started in Europe was completed in America.