Corporate Governance in the 21st Century

indgår i serie Corporations, Globalisation And the Law Series 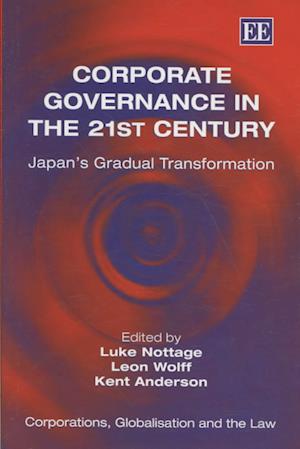 The 'lost decade' of economic stagnation in Japan during the 1990s has become a 'found decade' for regulatory and institutional reform. Nowhere is this more evident than in corporate law. In 2005, for example, a spate of reforms to the Commercial Code culminated in the new Company Act, a statute promising greater organisational flexibility and shareholder empowerment for Japanese corporations competing in a more globalised economy. But does this new law herald a more 'Americanised' system of corporate governance? Has Japan embraced shareholder primacy over its traditional loyalty to other key stakeholders such as 'main banks', core employees, and partners within diffuse corporate (keiretsu) groups? This book argues that a more complex 'gradual transformation' is unfolding in Japan - a process evident in many other post-industrial economies. The book brings together contributions from academics and practitioners from Japan, Australia, New Zealand, Canada and the United States. It includes chapters on comparative corporate governance theory and methodology, lifelong employment, the main bank system, board structures, and governance issues in small and medium-sized enterprises. The procedural, substantive and FDI policy dimensions of takeover law and practice are discussed, as well as empirical changes to corporate governance practices in large, publicly listed companies during the past twenty years. The authors' rich mix of national, disciplinary and professional backgrounds allows for a broad comparative perspective on developments in Japanese corporate governance. The book will be of great interest to scholars and students of law, business, political economy and Japanese studies, and will also appeal to corporate lawyers and policymakers.