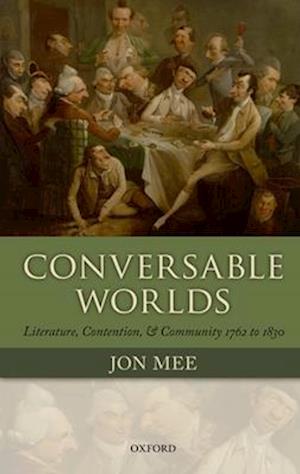 Conversable Worlds addresses the emergence of the idea of 'the conversation of culture'. Around 1700 a new commercial society was emerging that thought of its values as the product of exchanges between citizens. Conversation became increasingly important as a model and as a practice for how community could be created. A welter of publications, in periodical essays, in novels, and in poetry, enjoined the virtues of conversation. These publications wereenthusiastically read and discussed in book clubs and literary societies that created their own conversable worlds. From some perspectives, the freedom of a distinctively English conversation allowed for the 'collision' of ideas and sentiments. For others, like Joseph Addison and David Hume, ease of 'flow' was thekey issue, and politeness the means of establishing a via media. For Addison and Hume, the feminization of culture promised to make women the sovereigns of what Hume called 'the conversable world'. As the culture seemed to open up to a multitude of voices, anxieties appeared as to how far things should be allowed to go. The unruliness of the crowd threatened to disrupt the channels of communication. There was a parallel fear that mere feminized chatter might replace learning. This book examinesthe influence of these developments on the idea of literature from 1762 through to 1830. Part I examines the conversational paradigm established by figures like Addison and Hume, and the proliferation of conversable worlds into gatherings like Johnson's Club and Montagu's Bluestocking assemblies.Part II looks at the transition from the eighteenth century to 'Romantic' ideas of literary culture, the question of the withdrawal from mixed social space, the drive to sublimate verbal exchange into forms that retained dialogue without contention in places like Coleridge's 'conversation poems,' and the continuing tensions between ideas of the republic of letters as a space of vigorous exchange as opposed to the organic unfolding of consciousness.

Forfattere
Bibliotekernes beskrivelse Around 1700 a new commercial society was emerging that thought of its values as the product of exchanges between citizens. A welter of publications-periodical essays, novels, and poetry-enjoined the virtues of conversation and were enthusiastically discussed in book clubs and literary societies, creating their own conversable worlds.