- Popular Media from the 1950s to the Present

indgår i serie Cultural Politics of Media and Popular Culture 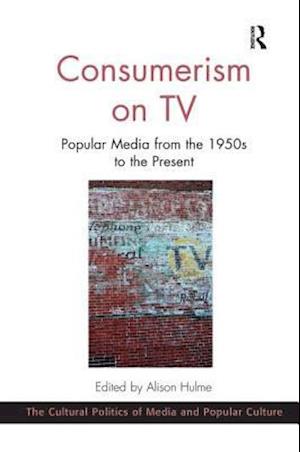 Presenting case studies of well-known shows including Will and Grace, Birds of a Feather, Sex and the City and Absolutely Fabulous, as well as 'reality' television, this book examines the transformations that have occurred in consumer society since its appearance and the ways in which these have been constructed and represented in popular media imagery. With analyses of the ways in which consumerism has played out in society, Consumerism on TV highlights specific aspects of the changing nature of consumerism by way of considerations of gender, sexuality and class, as well as less definable changes such as those to do with the celebration of ostentatious greed or the righteousness of the 'ethical' shopper. With attention to the highly delineated consumer field in which 'shopping' as an embedded practice of everyday life is caught between escapism and politics, authors explore a variety of themes, such as the extent to which consumerism has become embedded in forging identity, the positing of consumerism as a form of activism, the visibility of the gay male consumer and invisibility of the lesbian consumer, and the (re)stratification of consumer types along class lines. An engaging invitation to consider whether the positioning of consumerism through on-screen depictions is indicative of a new type of non-philosophical politics of 'choice' - a form of marketised, (a)political pragmatism - this book will appeal to scholars and students of sociology and cultural and media studies, with interests in class, consumption and gender.