- The Impact of Judicial Review in a Separated System 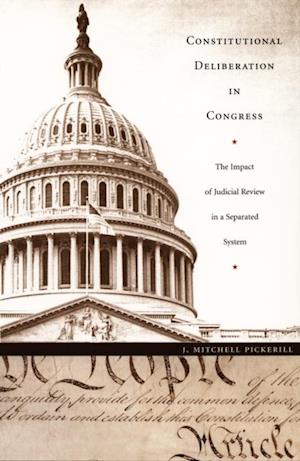 In Constitutional Deliberation in Congress J. Mitchell Pickerill analyzes the impact of the Supreme Court's constitutional decisions on Congressional debates and statutory language. Based on a thorough examination of how Congress responds to key Court rulings and strategizes in anticipation of them, Pickerill argues that judicial review-or the possibility of it-encourages Congressional attention to constitutional issues. Revealing critical aspects of how laws are made, revised, and refined within the separated system of government of the United States, he makes an important contribution to 'constitutionalism outside the courts' debates.Pickerill combines legislative histories, extensive empirical findings, and interviews with current and former members of Congress, congressional staff, and others. He examines data related to all of the federal legislation struck down by the Supreme Court from the beginning of the Warren Court in 1953 through the 1996-97 term of the Rehnquist Court. By looking at the legislative histories of Congressional acts that invoked the Commerce Clause and presented Tenth Amendment conflicts-such as the Child Labor Act (1916), the Civil Rights Act (1965), the Gun-Free School Zones Act (1990), and the Brady Bill (1994)-Pickerill illuminates how Congressional deliberation over newly proposed legislation is shaped by the possibility of judicial review. The Court's invalidation of the Gun-Free School Zones Act in its 1995 ruling United States v. Lopez signaled an increased judicial activism regarding issues of federalism. Pickerill examines that case and compares congressional debate over constitutional issues in key pieces of legislation that preceded and followed it: the Violence Against Women Act of 1994 and the Hate Crimes Prevention Act of 1997. He shows that Congressional attention to federalism increased in the 1990s along with the Court's greater scrutiny.