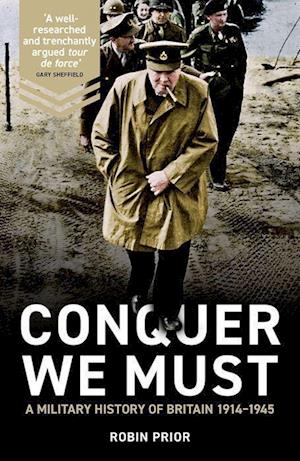 A major new account of Britain's military strategy between 1914-1945, including the two world wars and everything between The First and Second World Wars were separated by a mere two decades, making the period 1914-1945 an unprecedentedly intense and violent era of history. But how did Britain develop its complex military strategy during these wars, and how were decisions made by those at the top? Robin Prior examines the influence politicians had on military operations, in the first history to assess both world wars together. Drawing uniquely on both military and political archives and previously unexamined sources Prior explores the fraught relationships between civilian and military leaders: from Lloyd George's remarkably interventionist stance on military tactics during the First World War to Churchill's near-constant arguments with American leaders during the Second. Conquer We Must tells the complex story of this military decision-making, revealing how politicians attempted to control strategy-but had little influence on how the army, navy, and air force actually fought.

Forfatter
Bibliotekernes beskrivelse A major new account of Britain's military strategy between 1914-1945, including the two world wars and everything between 24 b-w illus. + 12 maps