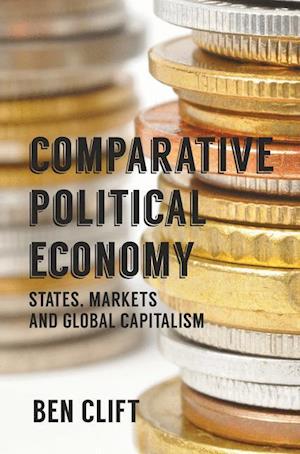 Forfattere
Forlagets beskrivelse This major new text introduces the analytical tools required to understand and interpret 21st century advanced capitalism and its evolution in the wake of the global financial crisis. Placing Comparative Political Economy in the context of key concepts and theoretical debates in the long-established field of Political Economy, it maps the terrain, substantive focus and evolution of the comparative approach. Furthermore, it connects Comparative Political Economy systematically to the subfield of International Political Economy (IPE), making the case for cross-fertilisation between these closely related fields. Re-invigorating the debate in the wake of the global financial crisis and the dramatic political interventions that followed, this text offers an entirely fresh and holistic review of comparative political economy. Ben Clift, a leading figure in the field, rethinks the supposed boundaries between comparative and international political economy, highlighting the how disciplines complement each other in an era where economic activity is increasingly coerced by political and social influence. Upper-level undergraduates and postgraduates studying Comparative Political Economy or a subject related to Political Economy will find this book essential. As the topics and disciplinary themes covered by this text are broad, students of more general Politics or International Relations courses will also be well served by this text.