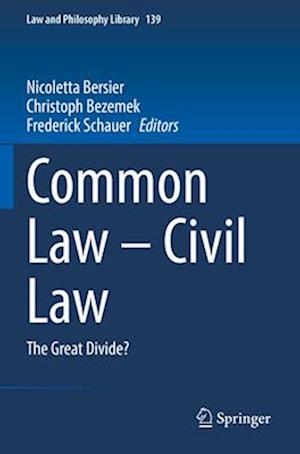 This book offers an in-depth analysis of the differences between common law and civil law systems from various theoretical perspectives. Written by a global network of experts, it explores the topic against the background of a variety of legal traditions.Common law and civil law are typically presented as antagonistic players on a field claimed by diverse legal systems: the former being based on precedent set by judges in deciding cases before them; the latter being founded on a set of rules intended to govern the decisions of those applying them. Perceived in this manner, common law and civil law differ in terms of the (main) source(s) of law; who is to create them; who is (merely) to draw from them; and whether the law itself is pure each step of the way, or whether the law's purity may be tarnished when confronted with a set of contingent facts. These differences have deep roots in (legal) history - roots that allow us to trace them back to distinct traditions. Nevertheless, it is questionable whether the divide thus depicted is as great as it may seem: international and supranational legal systems unconcerned by national peculiarities appear to level the playing field. A normative understanding of constitutions seems to grant ever-greater authority to High Court decisions based on thinly worded maxims in countries that adhere to the civil law tradition. The challenges contemporary regulation faces call for ever-more detailed statutes governing the decisions of judges in the common law tradition. These and similar observations demand a structural reassessment of the role of judges, the power of precedent, the limits of legislation and other features often thought to be so different in common and civil law systems. The book addresses this reassessment.