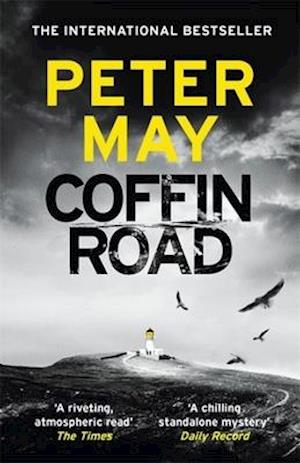 **A SUNDAY TIMES TOP 5 BESTSELLER****A BBC RADIO 2 BOOK CLUB PICK****FROM THE AUTHOR OF THE BLACKHOUSE, CAST IRON AND I'LL KEEP YOU SAFE**MILLION-SELLING PETER MAY MIXES MURDER, MYSTERY and MEMORY . . . AND MARKS HIS RETURN TO THE OUTER HEBRIDESA man stands bewildered on a deserted beach on the Hebridean Isle of Harris. He cannot remember who he is. The only clue to his identity is a folded map of a path named the Coffin Road. He does not know where this search will take him.A detective from Lewis sits aboard a boat, filled with doubt. DS George Gunn knows that a bludgeoned corpse has been discovered on a remote rock twenty miles offshore. He does not know if he has what it takes to uncover how and why.A teenage girl lies in her Edinburgh bedroom, desperate to discover the truth about her scientist father's suicide. Two years on, Karen Fleming still cannot accept that he would wilfully abandon her. She does not yet know his secret.Coffin Road follows three perilous journeys towards one shocking truth - and the realisation that ignorance can kill us.'A riveting, atmospheric read' The Times'A chilling standalone mystery' Daily Record'Clever, twisty . . . in the mode of Le Carre's The Constant Gardener' GuardianLOVE PETER MAY? Order his new thriller, A SILENT DEATH!