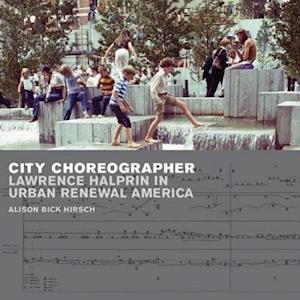 One of the most prolific and influential landscape architects of the twentieth century, Lawrence Halprin (1916-2009) was best known for the FDR Memorial in Washington, D.C., and Sea Ranch, the iconic planned community in California. These projects, as well as vibrant public spaces throughout the country-from Ghirardelli Square and Market Street in San Francisco to Lovejoy Fountain Park in Portland and Nicollet Mall in Minneapolis-grew out of a participatory design process that was central to Halprin's work and is proving ever more relevant to urban design today. In City Choreographer, urban designer and historian Alison Bick Hirsch explains and interprets this creative process, called the RSVP Cycles, referring to the four components: resources, score, valuation, and performance. With access to a vast archive of drawings and documents, Hirsch provides the first close-up look at how Halprin changed our ideas about urban landscapes. As an urban pioneer, he found his frontier in the nation's densely settled metropolitan areas during the 1960s. Blurring the line between observer and participant, he sought a way to bring openness to the rigidly controlled worlds of architectural modernism and urban renewal. With his wife, Anna, a renowned avant-garde dancer and choreographer, Halprin organized workshops involving artists, dancers, and interested citizens that produced "scores," which then informed his designs. City Choreographer situates Halprin within the larger social, artistic, and environmental ferment of the 1960s and 1970s. In doing so, it demonstrates his profound impact on the shape of landscape architecture and his work's widening reach into urban and regional development and contemporary concerns of sustainability.