- Book 4 of the Expanse (now a Prime Original series) 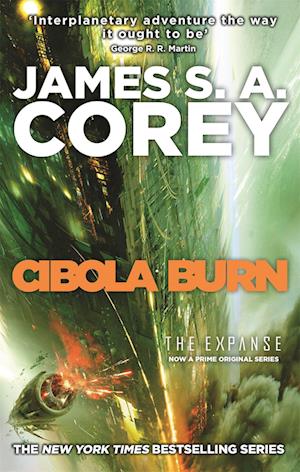 Forfattere
Forlagets beskrivelse NOW A PRIME ORIGINAL TV SERIESCibola Burn is the fourth book in the New York Times bestselling and Hugo-award winning Expanse series.The gates have opened the way to a thousand new worlds and the rush to colonise has begun. Settlers looking for a new life stream out from humanity's home planets. Illus, the first human colony on this vast new frontier, is being born in blood and fire. Independent settlers stand against the overwhelming power of a corporate colony ship with only their determination, courage and the skills learned in the long wars of home. Innocent scientists are slaughtered as they try to survey a new and alien world.James Holden and the crew of his one small ship are sent to make peace in the midst of war and sense in the heart of chaos. But the more he looks at it, the more Holden thinks the mission was meant to fail. And the whispers of a dead man remind him that the great galactic civilisation which once stood on this land is gone. And that something killed them.The Expanse is the biggest science fiction series of the last decade and is now a major TV series.Praise for the Expanse:'The science fictional equivalent of A Song of Ice and Fire' NPR Books'As close as you'll get to a Hollywood blockbuster in book form' io9.com'Great characters, excellent dialogue, memorable fights' wired.com'High adventure equalling the best space opera has to offer, cutting-edge technology and a group of unforgettable characters . . . Perhaps one of the best tales the genre has yet to produce' Library Journal'This is the future the way it's supposed to be' Wall Street Journal'Tense and thrilling' SciFiNowThe Expanse series:Leviathan WakesCaliban's WarAbaddon's GateCibola BurnNemesis GamesBabylon's AshesPersepolis RisingTiamat's WrathLeviathan Falls (coming 2021)
Bibliotekernes beskrivelse Cibola Burn is the fourth book in the New York Times bestselling Expanse series, now a Prime Original series