Casualty Evacuation for the Somme 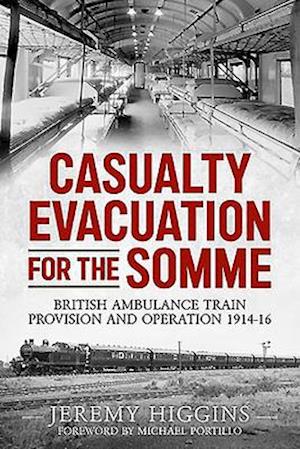 Over 6.2 million sick and injured troops during the First World War were evacuated from the Western Front. Yet, despite almost every aspect of the First World War having been examined by historians in near forensic detail, very little has been unearthed concerning casualty evacuation - and the start of the long road to recovery. The provision of high-quality treatment and care is an important attribute in the maintenance of morale and the will to fight. Therefore, casualty evacuation deserves more attention, and this book does just that. This book is about how mass casualties were planned for, and then evacuated in an age before many modern medicines, stabilisation techniques and helicopters.The main purpose of this book is to examine the evacuation of casualties from the first days of the Battle of the Somme in July 1916. The aftermath of the opening day of this battle, on 1 July 1916, resulted in the highest number of British casualties in any single day. A situation that was to severely test the medical and evacuation services, over a number of days.The book is based upon primary research of the War Diaries of medical units, and in particular those of the medical officers of the ambulance trains. The author has analysed the activity of every hour of every ambulance train in the period of June and July 1916 in order to build a unique oversight of how the evacuation pipeline coped with the crisis. This analysis is revealed after the reader experiences how the army medical services capability and procedures evolved as the war continued.The reader is taken on a journey from the 1840's to 1914 as military medical science and the capability of the railway in sustaining war, and in evacuation, developed concurrently. Thereafter, attention shifts to the frantic efforts in late 1914 to introduce a means to evacuate casualties by train. As medics and logisticians become more organised processes are introduced to manage casualty evacuation, trains are constructed and shipped to France. Thereafter, the book explains the principles of the medical evacuation pipeline from the point of injury, to the Casualty Clearing Stations, ambulance trains and eventually, many hours to the rear, the base hospitals.The emphasis then shifts to the medical planning and organisation for the Battle of the Somme, including learning from the experiences of the Battle of Loos in September 1915. The focus then turns to the 1 July 1916 and the initial battle, the surge of wounded and how the evacuation pipeline coped with the unprecedented demand. The book reveals how the mass of injured humanity from 1 July hit the limited number of Casualty Clearing Stations and were packed into almost 50 trains on long journey and uncomfortable journeys to places of safety and eventual recovery.This book exposes the enormous logistical and physical effort involved in mass casualty evacuation and shows that despite the unprecedented number of casualties, every available ambulance train was optimised to recover the wounded. It challenges the theory that ambulance trains failed on the 1 July 1916, and shows that, crucially, the medical planners for this battle failed to anticipate what was, in fact, a predictable level of casualties. What is unclear, though, is had they accurately predicted the casualty rate whether it would have been possible to have evacuated the injured any more expeditiously.