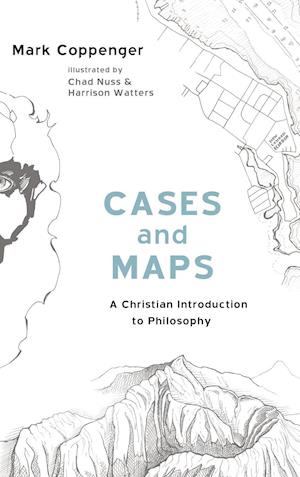 A dying man hires the services of a cannibal; a customs official insults a world-class sculptor; a farmer complains that low-flying bombers are killing his chickens; two rock groups claim the same name; a monkey takes a selfie; and a minister with mail-order credentials performs a wedding. The resulting court cases (and sixteen others) serve to introduce a wide range of philosophical notions (such as libertarianism, speciesism, and speech acts). Next, a subway employee draws a revolutionary map; a mountain loses its name; a strange cineplex puts people in each others' movies; the art museums of Madrid loom over neighboring buildings; a nautical chart guides seamen into a Connecticut port; and Jerusalem stands ""due north"" of the Mediterranean. These maps (twenty-three in all), whether real or imaginary, introduce yet other philosophical notions (such as pragmatism, universals, and paradigms). Along the way in both sections, we meet a wide range of thinkers, from Plato to Aquinas to Hume to Kant to Searle. The explanations and discussion questions are written from a Christian perspective, inviting believers to join in the perennial dialogue with the conviction that if you don't have philosophical and theological positions sorted out, then they will have you. ""Coppenger's book brims with inviting 'hooks' that draw students in to thinking about philosophical questions. Though the book is full of humor it provides a pathway into serious thinking for students."" --C. Stephen Evans, Baylor University ""Coppenger . . . leads with fascinating real-world cases and maps, and draws the philosophical implications and applications out in intriguing, helpful, and memorable ways. This is a great resource for learning--or re-learning--Christian philosophy."" --Jacob Shatzer, Union University ""Coppenger's Cases and Maps is a delightful journey into the pursuit of wisdom. With his trademark biting wit, Coppenger tackles philosophical issues both broad (Kant's epistemology) and narrow (abortion). . . . Using the lenses of legal cases and cartography to explore the big questions of life is simultaneously brilliant, whimsical, and successful."" --Tawa J. Anderson, Oklahoma Baptist University Mark Coppenger has a creative mind like few others. He takes compelling real life scenarios and forces us to see that sloppy thinking won't cut it in the actual world. . . . Highly recommended "" --Ted Cabal, Southern Baptist Theological Seminary ""An enticing philosophical buffet, Cases and Maps creatively draws on a broad range of legal decisions to illustrate how ordinary legal battles are quite often about big ideas and profound ethical dilemmas."" --Michael Poore, Director, The Humanitas Forum on Christianity & Culture Mark Coppenger is Professor of Christian Philosophy and Ethics at Southern Baptist Theological Seminary. He is the author of Moral Apologetics for Contemporary Christians (2011) and editor of A Skeptic's Guide to Arts in the Church (2018). Before seminary, he taught philosophy at Wheaton College. His written work has appeared in a variety of periodicals, including Teaching Philosophy, American Spectator, and the online editions of the Washington Post and the Philadelphia Inquirer.