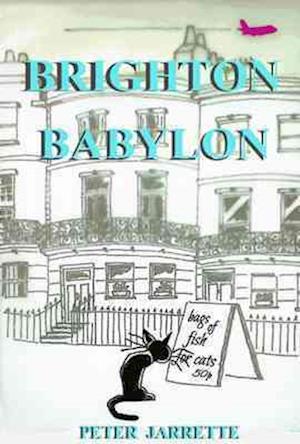 'Bags of fish for cats - 50 pence'. So it was written, on a chalkboard sign outside a fresh fishmonger's, under the arches of the raised promenade along the beachfront of England's newly super trendy and booming seaside City of Brighton and Hove. In Brighton Babylon, PK Heights is a Grade II listed maisonette flat in one of the City's up and coming Regency Squares that provides the elegant base for a series of interlocking true stories about the city's people and their lives. Newly relocated from London, Brighton resident Peter Jarrette combines and intertwines his stories, using a colourful palette that is one part Brokeback Beach and three parts seawater. He vividly portrays a selection of suspect characters and shocking episodes; much like the curious bits and pieces that might be on offer in one of those bags of fish for cats. To the author's consternation, the residents and visitors are a thoroughly peculiar and motley crew. This former string of south coast fishing villages with a royal and decadent past may now be a thoroughly cosmopolitan City and even aspire to being an international hub, but it has not yet lost its renowned and celebrated dark side, far from it.Brighton Babylon is populated by a cast of unsavoury hobos and bother boys; Yardie obsessed golden shower webmasters from nearby Crawley; mistakenly racist London hairdressers; strangely scripted market researchers; extemporised short-haul cabin crew; pushy airline First Officers; politically incorrect new food emporia; a vengeful, crumbling resort Pier and a locally obsessed, cat-mad press pack.