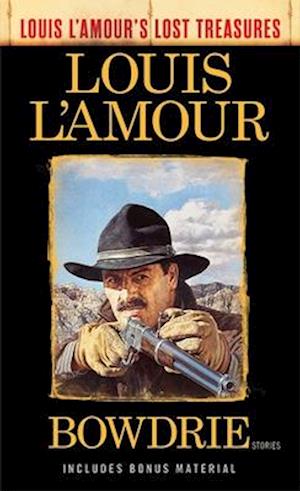 It was a name that caused the most hardened gunmen to break out in a cold sweat. Chick Bowdrie. He could have ridden the outlaw trail, but the Texas Rangers recruited him because they didn't want to have to fight against him. Pursuing the most wanted men in the Southwest he knew all too well the dusty trails, the bitter cattle feuds, the desperate killers and the quiet, weather-beaten, wind-blasted towns that could explode into actions with the wrong word. He had sworn to carry out the law, but there were times when he had to apply justice with his fists and his guns. They called in the Rangers to handle the tough ones and there was never a Ranger tougher or smarter than Bowdrie. Louis L'Amour's Lost Treasures is a project created to release some of the author's more unconventional manuscripts from the family archives.

In Louis L'Amour's Lost Treasures: Volumes 1, Beau L'Amour takes the reader on a guided tour through many of the finished and unfinished short stories, novels, and treatments that his father was never able to publish during his lifetime. L'Amour's never-before-seen first novel, No Traveller Returns, faithfully completed for this program, is a voyage into danger and violence on the high seas. These exciting publications will be followed by Louis L'Amour's Lost Treasures: Volume 2. Additionally, many beloved classics will be rereleased with an exclusive Lost Treasures postscript featuring previously unpublished material, including outlines, plot notes, and alternate drafts. These postscripts tell the story behind the stories that millions of readers have come to know and cherish.