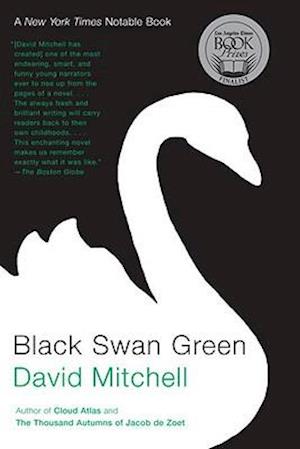 By the New York Times bestselling author of The Bone Clocks and Cloud Atlas - Longlisted for the Man Booker Prize Selected by Time as One of the Ten Best Books of the Year - A New York Times Notable Book - Named One of the Best Books of the Year by The Washington Post Book World, The Christian Science Monitor, Rocky Mountain News, and Kirkus Reviews - A Los Angeles Times Book Prize Finalist - Winner of the ALA Alex Award - Finalist for the Costa Novel Award

From award-winning writer David Mitchell comes a sinewy, meditative novel of boyhood on the cusp of adulthood and the old on the cusp of the new. Black Swan Green tracks a single year in what is, for thirteen-year-old Jason Taylor, the sleepiest village in muddiest Worcestershire in a dying Cold War England, 1982. But the thirteen chapters, each a short story in its own right, create an exquisitely observed world that is anything but sleepy. A world of Kissingeresque realpolitik enacted in boys' games on a frozen lake; of "nightcreeping" through the summer backyards of strangers; of the tabloid-fueled thrills of the Falklands War and its human toll; of the cruel, luscious Dawn Madden and her power-hungry boyfriend, Ross Wilcox; of a certain Madame Eva van Outryve de Crommelynck, an elderly bohemian emigr who is both more and less than she appears; of Jason's search to replace his dead grandfather's irreplaceable smashed watch before the crime is discovered; of first cigarettes, first kisses, first Duran Duran LPs, and first deaths; of Margaret Thatcher's recession; of Gypsies camping in the woods and the hysteria they inspire; and, even closer to home, of a slow-motion divorce in four seasons. Pointed, funny, profound, left-field, elegiac, and painted with the stuff of life, Black Swan Green is David Mitchell's subtlest and most effective achievement to date. Praise for Black Swan Green " David Mitchell has created] one of the most endearing, smart, and funny young narrators ever to rise up from the pages of a novel. . . . The always fresh and brilliant writing will carry readers back to their own childhoods. . . . This enchanting novel makes us remember exactly what it was like."--The Boston Globe " David Mitchell is a] prodigiously daring and imaginative young writer. . . . As in the works of Thomas Pynchon and Herman Melville, one feels the roof of the narrative lifted off and oneself in thrall."--Time