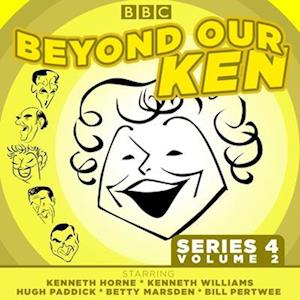 Nine more episodes from the fourth series of the popular radio comedy, plus bonus programme Forty Laughing YearsFull of whimsical witticisms, sketches, songs, puns and double entendres, Beyond Our Ken entertained the nation over seven series and 123 episodes. Published for the first time on audio, the nine episodes in this volume were initially broadcast on the BBC Light Programme in 1960-61.In these evergreen shows, Kenneth Horne's escapades include trying to get his windows cleaned, recounting the story of Raffles, being offered the freedom of the city of Giggleswade, and dealing with some morning callers.Meanwhile, Hornerama investigates topics of immediate interest, including 'Love and Marriage', 'Old British Customs' and 'The Film Industry'. There's also musical interludes from the Hornets, Janet Waters and the BBC Variety Orchestra.The episodes include Room at the Top, The Horse Soldiers, All Quiet on the Western Front, The Charge of the Light Brigade, A Hatful of Rain, Twelve O'Clock High, Tea and Sympathy, Some Come Running and Tunes of Glory. Also included is the 1962 tribute programme Forty Laughing Years, hosted by Kenneth Horne.Duration: 5 hours approx.