- The Black Experience in New York City Before World War I 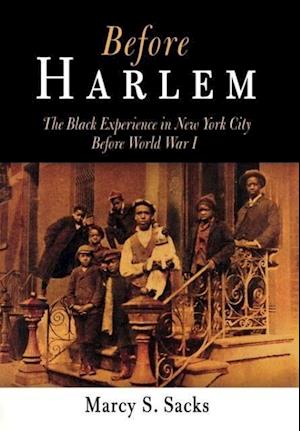 In the years between 1880 and 1915, New York City and its environs underwent a tremendous demographic transformation with the arrival of millions of European immigrants, native whites from the rural countryside, and people of African descent from both the American South and the Caribbean. While all groups faced challenges in their adjustment to the city, hardening racial prejudices set the black experience apart from that of other newcomers. Through encounters with each other, blacks and whites, both together and in opposition, forged the contours of race relations that would affect the city for decades to come.Before Harlem reveals how black migrants and immigrants to New York entered a world far less welcoming than the one they had expected to find. White police officers, urban reformers, and neighbors faced off in a hostile environment that threatened black families in multiple ways. Unlike European immigrants, who typically struggled with low-paying jobs but who often saw their children move up the economic ladder, black people had limited employment opportunities that left them with almost no prospects of upward mobility. Their poverty and the vagaries of a restrictive job market forced unprecedented numbers of black women into the labor force, fundamentally affecting child-rearing practices and marital relationships.Despite hostile conditions, black people nevertheless claimed New York City as their own. Within their neighborhoods and their churches, their night clubs and their fraternal organizations, they forged discrete ethnic, regional, and religious communities. Diverse in their backgrounds, languages, and customs, black New Yorkers cultivated connections to others similar to themselves, forming organizations, support networks, and bonds of friendship with former strangers. In doing so, Marcy S. Sacks argues, they established a dynamic world that eventually sparked the Harlem Renaissance. By the 1920s, Harlem had become both a tragedy and a triumph-undeniably a ghetto replete with problems of poverty, overcrowding, and crime, but also a refuge and a haven, a physical place whose very name became legendary.

Forfattere
Bibliotekernes beskrivelse The period between 1880 and 1915 marked the first sustained migration of black people into New York City as blacks and whites, both together and in opposition, forged the contours of race relations that would affect the city for decades to come. 8 illus.