- The Biography of Ignat Kaneff 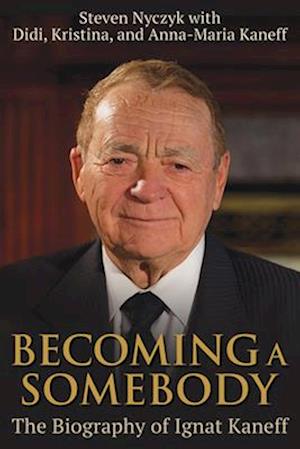 The fascinating life story of Ignat Kaneff, one of Canada's leading builders.When Ignat Kaneff arrived in Canada in 1951, he had five dollars to his name, spoke no English, and had very little education. Yet, this was the beginning of one of Canada's great immigrant success stories. Having left his native Bulgaria at just fourteen, Kaneff's journey to Canada was long. It even included a decade spent in wartime Germany, working as a market gardener, before his journey led him to Canada. Kaneff began working in Toronto's construction industry, where he showed tremendous drive, quickly founding a company and breaking ground on his first subdivision in the early 1950s. He continued on a trajectory toward success, and by the 1970s was ranked among Canada's top businessmen. Considered a pioneering citizen of the City of Mississauga, in 2017 he was inducted as a Member of the Order of Canada. Becoming a Somebody recounts his stunning rise to prominence.

Forfatter
Bibliotekernes beskrivelse Ignat Kaneff arrived in Canada in 1951 with a mere five dollars to his name, no English, and very little education. Within five years, he had started a construction company and broken ground on his first subdivision, kicking off a career as one of the country's top businessmen. His is one of Canada's great immigrant success stories. Index; 67 Illustrations, color