- Master Builders of the Spirit 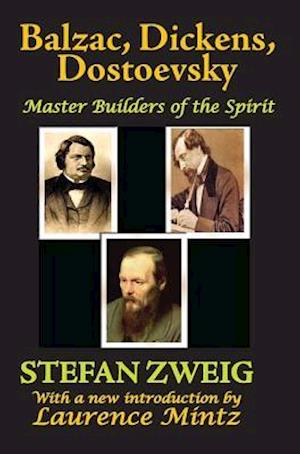 Written over a period of twenty-five years, this first volume in a trilogy is intended to depict in the life and work of writers of different nationalities--Balzac, Dickens, and Dostoevsky--the world-portraying novelist. Though these essays were composed at fairly long intervals, their essential uniformity has prompted Zweig to bring these three great novelists of the nineteenth century together; to show them as writers who, for the very reason that they contrast with each other, also complete one another in ways which makes them round our concept of the epic portrayers of the world.Zweig considers Balzac, Dickens, and Dostoevsky the supremely great novelists of the nineteenth century. He draws between the writer of one outstanding novel, and what he terms a true novelist--an epic master, the creator of an almost unending series of pre-eminent romances. The novelist in this higher sense is endowed with encyclopedic genius, is a universal artist, who constructs a cosmos, peopling it with types of his own making, giving it laws of gravity that are unique to these fi gures.Each of the novelists featured in Zweig's book has created his own sphere: Balzac, the world of society; Dickens, the world of the family; Dostoevsky, the world of the One and of the All. A comparison of these spheres serves to prove their diff erences. Zweig does not put a valuation on the differences, or emphasize the national element in the artist, whether in a spirit of sympathy or antipathy. Every great creator is a unity in himself, with its own boundaries and specifi c gravity. There is only one specifi c gravity possible within a single work, and no absolute criterion in the sales of justice. This is the measure of Zweig, and the message of this book.