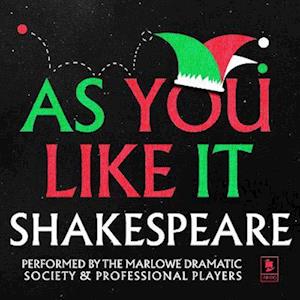 William Collins Books and Decca Records are proud to present ARGO Classics, a historic catalogue of classic prose and verse read by some of the world's most renowned voices. Originally released as vinyl records, these expertly remastered stories are now available to download for the first time.'The fool doth think he is wise, but the wise man knows himself to be a fool.'Forced into exile in the Forest of Arden, lovers Rosalind and Orlando become entangled in a beguiling game of love, lust and mistaken identity.Rosalind and her cousin escape into the forest and find Orlando, Rosalind's love. Disguised as a boy shepherd, Rosalind has Orlando woo her under the guise of 'curing' him of his love for Rosalind. Rosalind reveals she is a girl and marries Orlando during a group wedding at the end of the play.All of the Shakespeare plays within the ARGO Classics catalogue are performed by the Marlowe Dramatic Society and Professional Players. The Marlowe was founded in 1907 with a mission to focus on effective delivery of verse, respect the integrity of texts, and rescue neglected plays by Shakespeare's contemporaries and the less performed plays of Shakespeare himself. The Marlowe has performed annually at Cambridge Arts Theatre since its opening in 1936 and continues to produce some of the finest actors of their generations.Thurston Dart, Professor of Music at London University and a Fellow of Jesus College Cambridge, directed the music for this production.The full cast includes: John Barton; Tony Church; Peter Bingham; Anthony Jacobs; John Arnott; David Buck; Tony White; David Gibson; Denys Robertson; John Wilders; Gary Watson; Julian Pettifer; John Bird; George Rylands; Christine Baker; Wendy Gifford; Irene Worth; Mary Fenton.