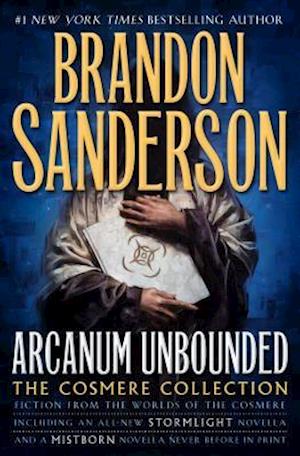 The collection will include nine works in all. The first eight are:

"The Hope of Elantris" (Elantris)

"Allomancer Jak and the Pits of Eltania, Episodes 28 through 30" (Mistborn)

"Shadows for Silence in the Forests of Hell" (Threnody)

"Sixth of Dusk" (First of the Sun)

These wonderful works, originally published on Tor.com and elsewhere individually, convey the expanse of the Cosmere and tell exciting tales of adventure Sanderson fans have come to expect, including the Hugo Award-winning novella, "The Emperor's Soul" and an excerpt from the graphic novel "White Sand."

Arcanum Unbounded will also contain the 120-page Stormlight Archive novella "Edgedancer," which will appear in this book for the first time anywhere. It is a story of Lift, taking place between Words of Radiance and the forthcoming Oathbringer.

Finally, this collection includes essays and illustrations for the various planetary systems in which the stories are set.

Other Tor books by Brandon Sanderson

The Hero of Ages

Mistborn: The Wax and Wayne series

The Alcatraz vs. the Evil Librarians series

Alcatraz vs. the Evil Librarians

The Knights of Crystallia

Other books by Brandon Sanderson