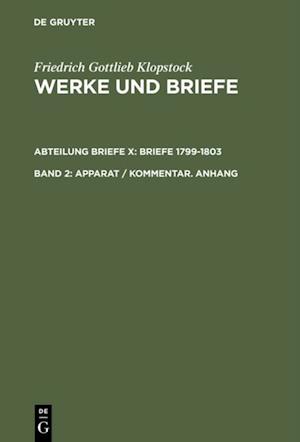 Friedrich Gottlieb Klopstock (1724-1803) is one of the most important figures in the history of German literature. He is seen as paving the way for the age of sentimentalism, Sturm und Drang, and the literature of experience. Klopstock was an ingenious linguistic innovator, and he established a body of work of lasting significance with his epic 'The Messiah', and with his odes, dramas and poetic writings. With his wide network of connections with Enlightenment poets and thinkers, he was a focus of the intellectual world of his age. The Hamburg Klopstock Edition is the first complete critical edition of Klopstock's works and letters. It contains complete versions of all of the texts available in both printed and manuscript form and presents them in their historical contexts. Much of this material was previously unknown or unpublished and has been neglected in Klopstock research. The comprehensiveness of the material and the editorial methods employed make the Hamburg Edition a firm foundation for research into Klopstock and his age. The edition is divided into three sections, 'Works,' 'Letters,' and 'Addenda.' The 'Works' section contains both the complete texts and critical, historical analyses of all of the literary and theoretical texts that Klopstock wrote and revised. The section not only includes previously unpublished works from the 'Gelehrtenrepublik' (Republic of Scholars) and the 'Grammatische Gesprche' (Grammatical Conversations) along with Klopstock's translations of Classical works but also demonstrates the breadth of variation within the works themselves which is typical of Klopstock's constant striving for perfection in the content and linguistic form of a text.