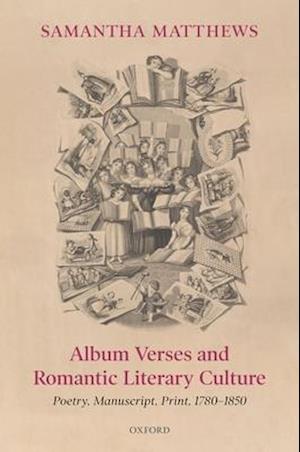 'Will you write in my album?' Many Romantic poets were asked this question by women who collected contributions in their manuscript books. Those who obliged included Byron, Scott, Wordsworth, and Lamb, but also Felicia Hemans, Amelia Opie, and Sara Coleridge. Album Verses and Romantic Literary Culture presents the first critical and cultural history of this forgotten phenomenon. It asks a series of questions. Where did 1820s 'albo-mania' come from, and whywas it satirized as a women's 'mania'? What was the relation between visitors' books associated with great institutions and country houses, personal albums belonging to individuals, and the poetry written in both? What caused albums' re-gendering from earlier friendship books kept by male students andgentlemen on the Grand Tour to a 'feminized' practice identified mainly with young women? When albums were central to women's culture, why were so many published album poems by men? How did amateur and professional poets engage differently with albums? What does album culture's privileging of 'original poetry' have to say about attitudes towards creativity and poetic practice in the age of print? This volume recovers a distinctive subgenre of occasional poetry composed to be read in manuscript, with its own characteristic formal features, conventions, themes, and cultural significance. Unique albums examined include that kept at the Grande Chartreuse, those owned by Regency socialite Lady Sarah Jersey, and those kept by Lake poets' daughters. As Album Verses and Romantic Literary Culture shows, album poetry reflects changing attitudes to identity, gender, class, politics,poetry, family dynamics, and social relations in the Romantic period.

Forfattere
Bibliotekernes beskrivelse This is the first book to tell the story of the Romantic album and its original poetry. It rediscovers a huge number of overlooked Romantic poems, and reconstructs how albums and their owners were represented in print 24 Illustrations